Don’t look for me else where; I live close to SC judge who gave you $450k before 2016 elections – Kevin Taylor to Akuffo Addo

This follows the report from the Commission on Human Rights and Administrative Justice (CHRAJ) which found Mr.Adjei guilty of conflict of interest in the performance of his duties at the PPA.

“The President of the Republic, Nana Addo Dankwa Akufo-Addo, has, by letter dated Friday, 30th October 2020, terminated the appointment from ofﬁce of Mr. Adjenim Boateng Adjei as Chief Executive Ofﬁcer of the Public Procurement Authority (PPA), with immediate effect,” a statement signed by Eugene Arhin, Director of Communications at the Presidency stated.

Mr. Adjei was investigated by CHRAJ for corruption and conflict of interest after he was accused of sidestepping procurement procedures for personal gains.

He was captured in an investigative piece titled ‘Contract for Sale by freelance journalist, Manasseh Awuni Azure in 2019.
He was thereon suspended by the President in August 2019.

In the documentary, a company known as Talent Discovery Limited (TDL), owned by Mr. Adjenim Adjei was found to be winning many government contracts through restrictive tendering and selling those contracts to others for profit.

The President referred to the corruption aspect of the case to the Office of the Special Prosecutor to probe and that of conflict of interest was directed to CHRAJ.

CHRAJ said in its report that it found tyrannical evidence to show that Mr. Adjei “put himself in several positions where his personal, relational, and pecuniary interest in TDL and other companies actually conflicted with the performance of the functions of his office as CEO and Board Member of PPA. The Commission holds that the Respondent [Mr. Adjei] has contravened article 284 of the 1992 Constitution”.

“The Respondent, being the CEO of PPA, the Regulator of the procurement sector, the Commission is of the strong and considered view that he has gravely abused his high office of trust, and the appropriateness and proportionality of any action to be taken by the Commission must be commensurate with the gravity of the abuse.”

It, therefore, compelled the President to terminate the appointment of Mr. Adjenim Boateng Adjei as the CEO of PPA.

The termination of Adjenim Boateng’s appointment means he is unfit to hold any public office for a period of five years. Accordingly, it is hereby directed that no appointing authority of the State should engage or appoint the Respondent (Mr. Adjenim Boateng Adjei) into any public office howsoever described for the said five (5) year period beginning from the date of this decision.”

“Primarily, this investigation was initiated on the basis of conflicts of interest allegations. In the course of the investigation, however, the Commission came across evidence of seeming unethical practices by the company TDL, the company owned by the Respondent and his brother-in-law. In the circumstances, the Commission is constrained to refer to the evidence of the seeming unethical practices of TDL to the Registrar of Companies and the PPA for further investigation and appropriate action.”

Below is the full statement: 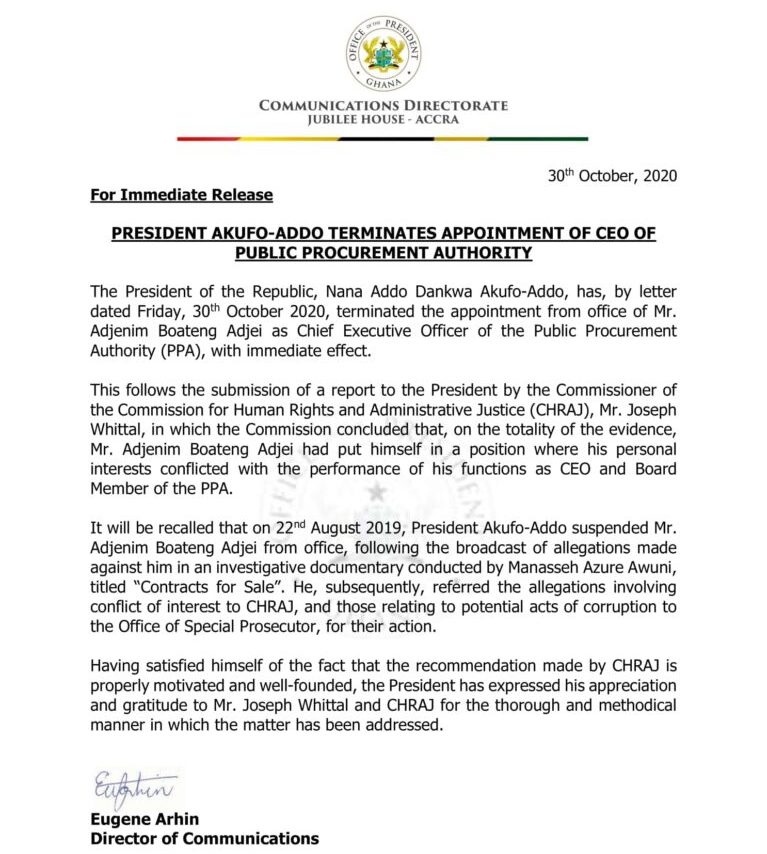 Read the Full CHRAJ Report of the Contract for Sale Scandal

Akufo-Addo is deceiving Ghanaians with this small...